One day tour "Nur-Sultan/Astana in one day" 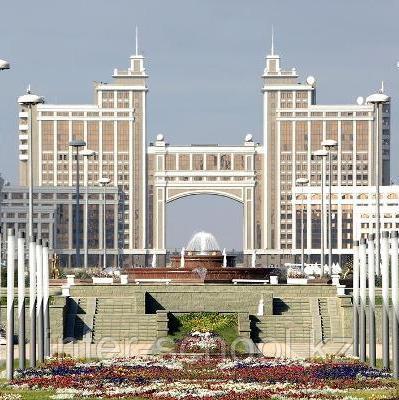 One day tour "Nur-Sultan/Astana in one day"

Discover the capital with us! During this tour you will visit the main attractions of Nur-Sultan city, get acquainted with the history of the city, its formation stages and the prospects for the future.
The duration of the tour is 10-12 hours

10:00-13:00 City tour along the boulevard "Nur Zhol" with a visit to the shopping and entertainment complex "Khan Shatyr", monument "Astana-Baiterek", the square with government buildings (House of Ministries, the presidential residence "Ak Orda", the Houses of Parliament of Kazakhstan, the Government, the Supreme Court), the Central concert hall "Kazakhstan" and Nazarbayev center.

The Shopping and Entertainment Center “Khan Shatyr” was recorded in the Guinness Book of Records as the largest tent in the world and in the FORBES list as the most unique building. Its uniqueness lies in the fact that it is a prototype of the city of the future, which can autonomously maintain the necessary conditions for a comfortable life, regardless of the year and the state of the environment. Special microclimate inside the complex allows visitors to enjoy themselves: modern restaurants, luxury boutiques, playground for children, a water park, with the sand brought from the Maldives

Visiting Nur-Sultan city symbol - the monument "Astana-Baiterek", located on the boulevard "Nur Zhol", will leave bright impressions due to the picturesque panorama of the Left Bank. Located at an altitude of 105 meters, Baiterek delights with a wide panorama of the city. The duration is 30 minutes.

15:30 Sightseeing tour on the Independence Square, where the Palace of Peace and Reconciliation (Pyramid), Kazakhstani National Museum, monument "Kazakh eli" (Kazakh people), the Independence Palace, the Palace of Arts "Shabyt" are located.
The monument "Kazakh Eli" is a symbol of Kazakhstan. Its height is 91 meters - the year Kazakhstan got independence. At the top of the monument is a sacred bird Samruk, there are bas reliefs on topics "Courage", "Creation", "The President and people", "Future" and the sculptural composition "Kazakhstani people".

16:00 Visit to the National Museum (Museum of the Military History of the Armed Forces of Kazakhstan, Pyramid or the Palace of Independence).

National Museum of the Republic of Kazakhstan was opened in 2014. This ultra-modern museum has 9 halls. The room contains ethnographic objects of everyday life of Kazakh people. In the halls of gold and precious metals there is a replica of the Golden Man - the most important historical monument found in the Issyk burial mound in 1969. The museum is equipped with the latest technology. There are daily shows "The dynamic layout of Astana" in Astana hall, a giant gilded eagle flaps its wings in the lobby and a slideshow in 3D «Map of Kazakhstan" starts.

Tour around the Palace of Peace and Accord (Pyramid) During our tour you will be able to see the opera hall, Cheops Atrium hall, "Besik" (Cradle) hall, exhibition halls, gallery "Kulanshi" and enjoy the stained-glass window with the image of 130 pigeons, made by the English designer Brian Clark. Duration: 40 minutes.

17:00 Visit to the Hazret Sultan Mosque.

Hazret Sultan Mosque is translated from the Arabic as "Holy Sultan". It is the largest mosque in Central Asia. The duration is 30 minutes.

18:00 Visit to the Museum of Future at Expo centre.

Cost of the tour per 1 person:

-Pick up from/to the railway station or a hotel
- Transportation services according to the program
- Sightseeing tour of Astana
- Accompanying guide during the day
- Meals: breakfast, lunch, dinner
- Tickets to sights:
Monument "Astana-Baiterek"
Museum of the First President of RK
National Museum of the Republic of Kazakhstan (Independence Palace or the Palace of Peace and Accord)
the Museum of Future at Expo centre
The company reserves the right to change the program without changing the volume of services provided.